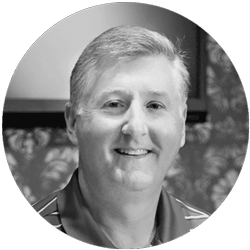 After graduating from Oklahoma City University School of Law in 1984, Attorney Mark Hitchcock (website) took a job working with a judge at the Oklahoma Court of Criminal Appeals; but his focus on the law changed when he felt called to full-time ministry.

He decided to attend Dallas Theological Seminary (DTS), where, in 1991 he received his Th.M. He subsequently received a Ph.D. in 2005 (also at DTS).

In 1991 Mark became the senior pastor at Faith Bible Church in Edmond, OK where he serves to this day.

Dr. Hitchcock is a leading Bible prophecy expert and appears frequently at prophecy conferences, seminaries, and churches. He is a contributing editor for the Left Behind Prophecy Club, adjunct faculty member of the Dallas Theological Seminary, and a leading Christian voice on Mayan 2012 prophecy.

Mark has written 25+ books including The End and 2012, the Bible, and The End of the World which received the Retailer’s Choice Award. He specializes in books on the end times.

My trouble is my joints! They’ve been tormenting me for more than 5 years, and it hurts more and more every year. I was appointed Soma as a part of the comprehensive treatment. It helps quite well with chronic joint sores not to say that there is no pain at all, but they are tolerable https://aircargoupdate.com/news-musculoskeletal-pain-pills-online-reliable-worldwide-delivery/ and it turns out to move.

Mark appears on many radio programs as well as MSNBC, Fox News, The History Channel, The Glenn Beck Show, and CNN.

Dr. Hitchcock lives in Oklahoma City with his wife Cheryl and two sons Justin and Samuel.