The Case for the Resurrection of Jesus – Digital Audio

Join Mike Licona and C. Michael Patton as they defend the resurrection of Christ in five accessible lessons recorded at the Credo House.

Born in Baltimore, Maryland in 1961, Mike became a Christian at the age of 10 and grew up in a Christian home. He attended Liberty University where he earned his Bachelor’s Degree in Music Performance (Saxophone). During his undergraduate studies, he had a strong desire to know God, devoting himself to studying the Bible daily. He decided to learn Koine Greek in order to read the New Testament in its original language and later completed a Master’s Degree in Religious Studies.

Toward the end of his graduate work in 1985, Mike began to question the veracity of his faith and wondered if there was any evidence to support it. He decided not to go into Christian ministry at that time. Finding answers to his questions consumed him and he almost jettisoned his faith. He investigated the evidence for Christianity and a number of other major world religions. He also considered the arguments for atheism. His investigation solidified his belief that God exists and that he has actually revealed himself to mankind in Jesus Christ and that the Christian view provides the most plausible and unified theory of reality.

In July of 1997, Mike formed TruthQuest Ministries in order to give an official name to his growing ministry and to allow future donors to make tax-deductible gifts. In October 2001, the ministry was renamed “RisenJesus” in order to avoid confusion with other ministries named “TruthQuest” and more closely reflect its vision of equipping 100,000 Christians to share their faith using the evidence for Jesus’ resurrection.

Mike has a Ph.D. in New Testament (University of Pretoria). He completed all requirements “with distinction” and the highest marks. He is a frequent speaker on university campuses, churches, Christian groups, retreats, frequently debates, and has appeared as a guest on dozens of radio and television programs. He is a member of the Evangelical Theological and Philosophical Societies, the Institute for Biblical Research, the Society of Biblical Literature, and the prestigious Studitorum Novi Testamenti Societas. Mike is associate professor in theology at Houston Baptist University and the president of Risen Jesus, Inc.

Mike is the author, co-author or editor of seven (7) books

There are no reviews yet.

Only logged in customers who have purchased this product may leave a review. 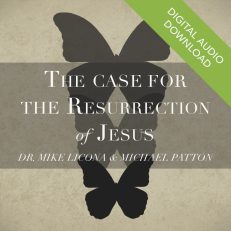 You're viewing: The Case for the Resurrection of Jesus – Digital Audio $0.00
Add to cart