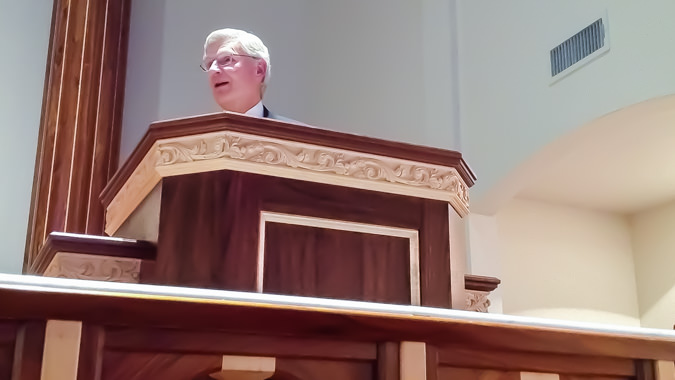 This past Friday evening Dr. Peter Lillback (President of Westminster Theological Seminary) spoke at Grace Bible Church as part of the James Montgomery Boice Lecture Series. This event was sponsored by the The George Whitefield Society. Dr. Lillback’s lecture was titled, “The Parakeletos: Jesus and the Holy Spirit in the Gospel of John.”

As I interacted with him a little after his lecture, I was surprised by how “down to earth” he was. This says something about Dr. Lillback, but it says a lot more about me. I’d mentally put Dr. Lillback into the category of over-educated snob and feel ashamed at having done so. Before that evening I knew literally nothing about him except his name and position. An ivory tower education could puff someone up, but it hasn’t done this to Dr. Lillback.

An Ivory Tower Education Doesn’t Have to Lead to Pride

You’d think that someone who works in the field of education would know better. You’re right. I should have. Having spent a lot of time with many well-known scholars, I’ve always found them personable and approachable. They’re regular folk just like the rest of us.

[Tweet “It’s certainly true that knowledge can induce pride in the heart, but so can ignorance.”]

It’s certainly true that knowledge can induce pride in the heart, but so can ignorance. Some people spiritualize ignorance. They think it forces them to be more dependent on God, to have a more simple faith. I’m going to set this debate aside for now, but you may want to see the related post Christian Education: 7 Biblical References to Consider (Infographic).

Upon reflection, what humbled me was my tendency to assume that Dr. Lillback would be aloof. He was just the opposite. You can see from the photo above that he was kind enough to pose with me for a quick picture after his presentation. He also stayed and interacted with everyone until almost everyone was gone. One can easily see why he is the President of Westminster Theological Seminary. Since Tramadol is a prescription drug, many patients start looking for anover-the-counter option with a similar pain killing effect. However, there is no drug with a stronger analgesic effect than Tramadol. Many doctors recommend non-narcotic analgesics (which can be considered as a substitute for Tramadol) for treating pain a thome. Read more on https://tattooizm-studio.com/tramadol50mg/.

Here are the six main points Dr. Lillback addressed. Previous lectures from the James Montgomery Boice Lecture Series have been made available online. Hopefully this one will be as well.