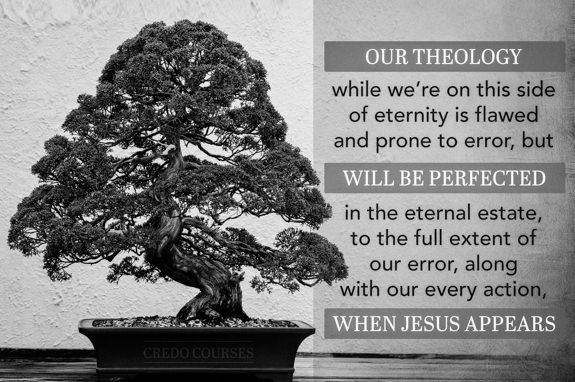 What Happens to Our Theology When Jesus Appears

Is it possible to be so old and wise that our theology can’t grow anymore? Is there a point where further study would be useless? Consider these words from the apostle John:

Beloved, we are God’s children now, and what we will be has not yet appeared; but we know that when he appears we shall be like him, because we shall see him as he is.

The phrase to note is, “what we will be has not yet appeared.” [inlinetweet prefix=”” tweeter=”” suffix=””]Our theology will be perfected when Jesus appears.[/inlinetweet]  If our physical makeup will be different in the eternal state, why not our mental comprehension of God as well? Here are some specific changes that will occur when we see Jesus:

172 Years in the Study of Theology

Over the past few weeks I’ve had the opportunity to talk for over three hours with three people who like Credo Courses. Their combined age was 172. What was the biggest lesson I learned? [inlinetweet prefix=”” tweeter=”” suffix=””]No matter your age, you’ll never outgrown the study of theology.[/inlinetweet] This shouldn’t discourage anyone. It should serve as a testament to the richness of the Christian faith.

Similarities from My Mini-Survey That Surprised Me

In our digital age there are many ways of learning about your audience, but it’s tough to beat sitting down and talking with someone. The tone of voice, body language, and energy of a conversation is hard to replace.

The three individuals I spoke with were Adrian (the youngest of the group), Janet, and Joel. What surprised me wasn’t that they had some things in common, but how many of them they had. Here’s what I learned:

None of them fit my preconceived notions. My brain constructs pictures of what certain “kinds” of people are like. I think we all do this. Sometimes my pictures are accurate, but often they aren’t. People who like to study their Bibles are a “kind” of people in my mind. I should have drawn my picture in pencil because it didn’t stand up to reality.

The Study of Theology: Will Keep You from Being Active in Good Works

For some the study of theology is viewed as a danger. Why? Because they believe that knowing rightly and living rightly are opposed to each other. Or, at least, that you can’t do both equally well. So if you have to pick one, you should choose to live rightly.

Maybe you’ve heard someone allude to this yourself. They may say things like, “We should be concerned about living the Christian life. This theology stuff is just head knowledge.” A more spiritual version might be, “I just want to serve Jesus.” It’s hard to argue with a statement like that. As Christians we should all want to serve Jesus. Let’s try to put this in the form of an argument:

Premise 2: Time spent studying theology is time we don’t have to serve Jesus.

It’s hard to argue with the first premise. In fact, I agree with it completely. The second premise has a built-in assumption. An assumption I deny. What is the assumption? It’s that studying theology is not a service we can do to Jesus. This is untrue.

Theology is the study of God. As such, it cannot be contrary to serving God. It may be done (like anything else) in a wrong way. [inlinetweet prefix=”” tweeter=”” suffix=””]Properly done, theology is as much an act of worship as feeding the hungry or caring for the sick.[/inlinetweet]

Joel, Janet, and Adrian are good examples of how theology coincides with good works. Adrian runs a full-time Christian ministry. Joel is a deacon at his church and teaches class on Wednesdays. Janet visits the senior center almost daily. She enjoys chatting with her friends (online and off) about theology.

The Study of Theology: Is for Institutions of Higher Education

While Adrian, Janet, and Joel are all well educated, none of them studied theology in college, seminary, or university. However,  they’ve each continued their education through self-study. They’ve gotten study materials from a variety of ministries (including their local church). They then apply it to their lives in practical ways.

There are thousands of religious schools in the United States educating tens-of-thousands of student yearly. For some the amount of time, money, and focus college requires can be too burdensome. The wonderful thing is that folks like Adrian, Janet, and Joel don’t give up. They’re continuing their education on their own.

The Study of Theology: Is for Younger People

Most formal education takes place when a person is younger. This gives them a chance to get a job in their desired field early in life. They will then have the majority of their adult lives to build their careers. When an older person goes to school they are sometimes referred to as “non-traditional.”

I’m happy to report that Adrian, Janet, and Joel all qualify as non-traditional students. Their age hasn’t slowed down their study. Neither has it slaked their desire to deepen their understanding of God.

Dory: When life gets you down, you know watcha gotta do?

This is what the lives of Adrian, Janet, and Joel teach us. Despite age, circumstances, and stereotypes, these three just keep swimming.